My Name is Rachel Corrie speaks out

By: Eugene Yiga
On 16 March 2003, 23-year-old American activist Rachel Corrie was crushed to death by an Israeli Army bulldozer as she was trying to prevent the demolition of a Palestinian home. Now, following its London premiere in April 2005 and subsequent productions around the world, the controversial one-woman play based on Corrie's journals and emails is on at Cape Town's Baxter Theatre.

"We've tried to do justice to the whole of Rachel: neither saint nor traitor, both serious and funny, messy and talented, devastatingly prescient and human and whole," said British journalist Katharine Viner, who edited and adapted the material with Alan Rickman. The result is a fascinating portrayal of a passionate young woman who describes herself as "scattered and deviant and too loud". It's the kind of beautifully written text that you just want to read over and over again. 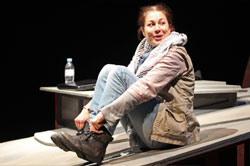 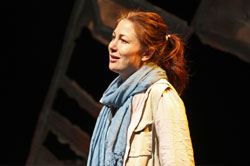 Strong reactions all over the world

Of course, it's hard to know what you'll feel one way or the other. My Name is Rachel Corrie has created strong reactions all over the world, with some theatres refusing to stage it at all and some audience members moved to tears like I've never seen before. Granted, the material is a bit one-sided (which is expected given that we're dealing with one person's views), but it's still the kind of performance that deserves to be experienced before you make up your mind.

My Name is Rachel Corrie is at Cape Town's Baxter Theatre until 27 July. Tickets are available from Computicket. For more information, go to www.rachelcorriefoundation.org.