The Miser is rich and rewarding

By: Eugene Yiga
"Miss Molière's The Miser," wrote a reviewer in The Star, "and you are sacrificing the South African production of the year. Any year." Part satire and part farce, the adapted 17th-century classic, which won four Naledi Theatre Awards following its premiere at Johannesburg's Market Theatre last October, is now showing in Cape Town. 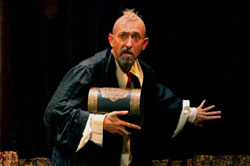 Without giving too much away, The Miser tells the story of a rich but stingy old widower who lives in constant fear of losing his amassed wealth. His obsession is so great that he's prepared to sacrifice his happiness (and that of his two children, who wish to marry individuals of lesser means) just to get or save some cash.

"My love affair with Molière's work goes back a long way," said director Sylvaine Strike, Fleur du Cap winner for Best New Director in 2005. "I never had the courage to believe Molière's work had a place in our theatrical landscape. It is only after reading several of his works, over and over again, that I felt The Miser belonged in our world and in this era of fiscal crisis, more than ever before."

Wonderfully witty and quite insightful 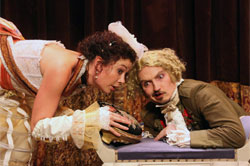 There are so many things to love about this production, from extravagant costumes by designer Sarah Roberts to the brilliant acting from the ensemble of eight. (The Miser stars Lionel Newton in the title role; William Harding and Kate Liquorish as his children; and Atandwa Kani, Mpho Osei-Tutu, Patricia Boyer, Jason Kennett, and Motlatji Ditodi as servants, lovers, and whatnot.)

The writing is also wonderfully witty and quite insightful, still retaining its relevance even though it was written in a time of footstools and genuflections almost 350 years ago. "Molière is one of the greatest architects of comedy as we know it today," Strike continued. "His plays are delicious, hilarious and poignant, but above all, they remain consistently relevant to us universally, as a human race." You've got to see this play to fully understand why.