For the love of odd

By: Eugene Yiga
So, you think that you can love? That's the question that award-winning actress and comedienne Sonia Esgueira asks in her new one-woman show. Directed by John Trengove, it explores the ups and downs of love, relationships, and everything else that we encounter on the road to happily ever after. 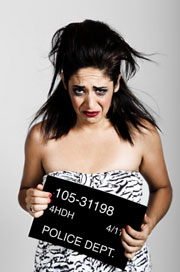 Sonia portrays the life of a woman stuck in a hopeless cycle of speed dating, one-night stands, and hitting on her friends. And as her desperation grows, she's prepared to try anything and everything, from psychics and sangomas to Indian gurus and blind dates from her mum.

As quite a versatile performer, she seamlessly changes from one character to another (including her friends, her mother, and her especially bad dates) with nothing but a different jacket, hat, or shawl. Even on a fairly basic set, it's easy enough to image yourself wherever she takes you because the picture that she creates is so clear.

What's less clear is how many people will pardon the occasionally profane language (which I'm surprised didn't give the show an age restriction). But perhaps the audience won't mind because we can relate to the frustration expressed.

We get excited about a first date only to have our hearts broken a few weeks later. We get over a relationship by eating ourselves silly and/or stalking the ex. We've all been there and perhaps still are. (Insert awkward coughing here.) I guess it's nice to know that we're not alone.

So You Think You Can Love is at Cape Town's Artscape Theatre until 30 March. Tickets are available from Computicket.
NextOptions
›
Email Print PDF
Follow