10 Sep 2008 | Email | Print |   PDF
Issued by: Ipsos
High performance and sports car drivers are most likely to be victims of road rage, according to a recent road rage survey by Synovate. This is true of road rage behaviours including persistent flashing headlights, hooting, rude gestures and insults, as well as aggressive driving behaviour. Of those that have reported being the victim of road rage where another driver actually got out of their vehicles, most are reported by drivers of small cars.

Synovate has conducted studies into road rage since August 2005. Last year December, the levels of road rage were at their lowest, and have only marginally increased in this reading. Aggressive/threatening driving behaviour has been reported by 51% of the driving population.

The results of Synovate's latest road rage measurement reflect the views of 2003 respondents across Gauteng, Durban and Cape Town. Respondents were questioned on various factors which contribute to road rage in South Africa.

Does the size of your car impact on your likelihood to become a victim of road rage? 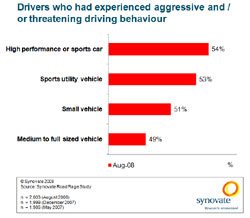 How is road rage being experienced?

Overall, 51% of South Africans said that they had experienced aggressive and/or threatening driving behaviour in the last year. Fewer drivers in Durban had been victims compared to the last measure (dropping from 46% to 41%) but Gauteng drivers are still most prone to experience this behaviour (55%).

Almost half of the drivers interviewed have been affected by rude gestures and verbal insults. Gauteng drivers were most afflicted (52%) followed by Durban drivers (43%), with drivers in Cape Town reporting the lowest number of incidents (39%).

The persistent flashing of headlights has increased in the most recent reading - with 46% being on the receiving end. This has increased noticeably amongst 18 to 24 year olds - almost two thirds of which experience this. More male drivers (48%) admitted to experiencing this behaviour compared to women (38%). 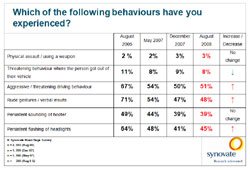 And how is road rage being expressed?

An increased percentage of South Africans are admitting to hooting, flashing their headlights and directing rude gestures towards other drivers to express their road rage. However, violent and confrontational behaviours such as getting out of the vehicle, physical assault and aggressive driving, have shown a slight decline in this measure.

When it comes to violent acts of road rage, men are clearly more expressive and confrontational than women are. Eleven-percent (11%) of men confessed that they had directed threatening driving behaviour towards other drivers and 3% admitted to physically getting out of their vehicles to express their anger; in comparison, women scored 7% and 1% respectively. However, more women (30%) than men (28%) admitted to sounding their hooter in order to express their anger. This demonstrates that women are more comfortable expressing themselves in the security of their car. 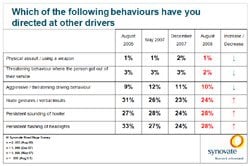 Which region directs the most rage on their roads?

Compared to the other regions Gauteng drivers are most likely to confront others by physically getting out of their vehicles. Gauteng and Durban were equally likely to use physical assault and/or a weapon to express their road rage. Capetonians are least likely to direct their anger and frustration towards other drivers, scoring lower than the other regions on all attributes.

Looking at the less violent acts, the persistent flashing of headlights and sounding of the horn have both increased in Gauteng. The most discourteous of drivers reside in Gauteng, with 28% admitting to directing rude gestures and verbal insults towards others, a 3% increase from the last measure. Durban drivers are clearly minding their manners, showing a drop of 5% the use of these gestures between this measure and the last. 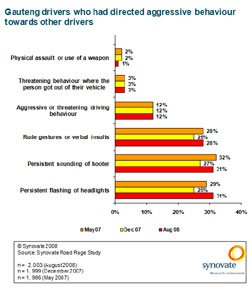 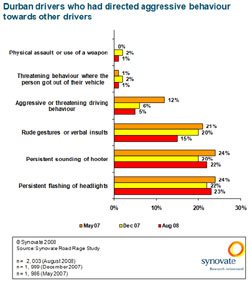 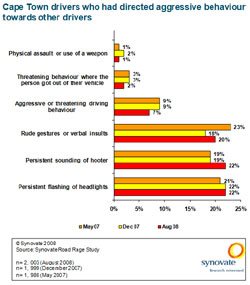 Four out of ten drivers in South Africa say that they are slow and cautious drivers. Forty-seven percent (47%) of drivers of small cars felt that they were cautious on the roads.

Expectedly, high performance or sports cars had the largest relative proportion of drivers (14%) who felt that they drove fast and recklessly. This reckless driving behaviour could possibly be the reason behind the increased amount of road rage behaviours being directed towards these drivers.

Advocate Johan Jonck from the Arrive Alive Road Safety Website (www.arrivealive.co.za) says that he has seen an increase in the number of South Africans reporting bad driving.

Jonck says that "a recent news story informed road users that they can report bad driving to the National Traffic Call Centre and since then there has been an increase in reports." Jonck describes these reports saying that "most of these reports are of instances of aggressive driving by other road users such as cutting between traffic and failure to adhere to following distances."