It's about what's in the mix: Finalists for Absa Perold Cape Blend awards

29 Sep 2017 | Email | Print |   PDF
Since its inception in 2011, the Absa Perold Cape Blend awards have grown in stature, with winemakers treasuring the opportunity to present their take on South African combinations using Pinotage as the key component. On 4 October at the Overture Restaurant of Hidden Valley in Helderberg, Stellenbosch, the latest submissions of five winemakers will earn them one of the most coveted prizes in the SA wine industry. The 10 finalists this year are from cellars in Wellington, Walker Bay, Swartland, Olifants River and Stellenbosch, as well as Paarl, where Windmeul Cellar continues its phenomenal year as the only producer nominated for an Absa Perold Cape Blend trophy who earlier triumphed at the 2017 Absa Top 10 Pinotage awards.

The taste-off was introduced to showcase the best expressions of various Pinotage-oriented wine styles. It is great to see the constant introduction of new interpretations of the Cape Blend concept and how in sync winemakers are with their terroir and production techniques to increase the quality every year.

As Pinotage Association vice-chair De Wet Viljoen reiterates: “The aim is to promote bold, vibrant wines truly representative of South Africa, wines with a significant Pinotage component that possess the kind of complexity, balance and maturation potential that will stand out on the world stage.”

Jacques Roux, the convener of the judging panel, indicated that is encouraging to see how winemakers use their best grapes to craft exceptional wines and in so doing set benchmarks of excellence that their estates are capable of. He says it is delightful to assess premium bottlings from winemakers with different approaches to their art.

According to John Tshabalala, Absa’s provincial managing executive in the Western Cape, Pinotage and the Cape Blend category of wines are truly unique jewels in the crown that is the South African wine industry. “This partnership reflects our long-standing commitment not only to the Pinotage Association but to the South African wine industry as a whole. Our corporate philosophy is strongly centred around ideas, innovation and creativity, and the Cape Blend winemakers reflect these values with their dynamic and passionate search for wines that have their own identity, are creatively put together and reflect the excellence of Brand South Africa, of which we as a bank are proud to be a part of,” says Tshabalala.

“Our continued involvement with this competition is inspired by our confidence in the new generation of South African winemakers who are working hard to increase the prestige and sophistication of wines produced in South Africa.” 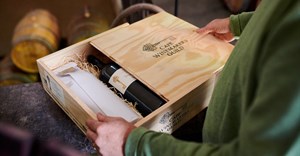