22 Sep 2011 | Email | Print |  PDF
By: Zeenat Moorad
Retailers are concerned about the outlook for retail sales during the fourth quarter of 2011 and beyond, according to a retail industry specialist.
"Most retailers report that business conditions have started to deteriorate and therefore expect volume growth to ease in coming months," Derek Engelbrecht, retail and consumer products sector leader at Ernst & Young said.

Though SA retail sales rose more than expected in July, up 2.8%y/y, according to Stats SA data out on Wednesday, consumer spending was losing momentum in the absence of job growth, Stanlib economist Kevin Lings said.

He added that the problem was that most consumers couldn't avoid these increases, as these expenses related to necessities or essential goods.

"While consumer inflation remains inside the target range, it does so because a number of non-essential costs as very well contained. Ultimately SA consumer activity will systematically lack vibrancy in 2011/2012 without a meaningful increase in employment," the economist said.

The recent hikes in food and fuel prices, coupled with lower real wage increases, as well as the high base created by the strong growth in retail sales during 2010, retail volume growth is expected to slow further over the next six months.

On the bright side, the BER's index for the overall profitability of semi-durable goods retailers - those who sell textiles, clothing and footwear is currently at a decade high.

These retailers saw the highest volume growth during the third quarter of 2011, boosted by very low interest rates and an uptick in retail store credit growth.

Semi-durable goods retailers have also been able to increases their selling prices, and the vast majority reported that sales volumes were even higher compared to the impressive volumes recorded during the 2010 Soccer World Cup months.

"While rising wages and high cotton and other commodity prices have also led to a substantial increase in purchasing prices, the combination of strong volume growth and higher selling prices saw a significant improvement in the profitability levels of semi-durable goods retailers," Engelbrecht noted.

Truworths (TRU) said last month that retail sales for the first seven weeks of the 2012 financial period had increased by 10.4% over the corresponding period in 2011. But upmarket Woolworths (WHL) warned that trading conditions would be tougher in the second half of the year due to the negative impact of global economic challenges on the rate of growth of the South African economy and in particular consumer confidence.

"While rising food prices should bolster turnover growth, the slow pace of job creation in South Africa, coupled with lower real wage increases compared to last year, will in all likelihood weigh on non-durable goods sales volumes during the months ahead," Engelbrecht said.

Shoprite (SHP) CEO Whitey Basson cautioned in August that the group did not foresee present market conditions to change materially.

The company reported a 12.4% rise in full-year profit for the year ended June, against the background of the lacklustre performance of the economy and the continuing increase in unemployment, as disposable income of consumers came under increased pressure from high household debt and the surging cost of essential services.

In the durable goods category, sales of furniture and household appliances remained strong during the third quarter, but hardware, paint and glass sales contracted - correlating with the slump in the domestic property market and the fact that the building and construction industry is still in the doldrums. 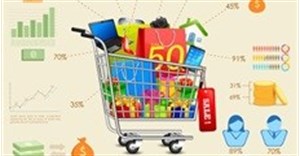 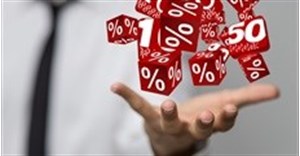