Up the Creek goes online with relief showArticle

Up the Creek has joined forces with some key players in the industry to put together an online show on Saturday 6 June to raise much needed funds for the events industry...

In light of the recent Covid-19 outbreak around the country, Naked Insurance has offered a solution to all those postponed and cancelled concerts and performances...

Francois van Coke, Shortstraw, WONDERboom and more announced for Up the Creek 2020Article

The third batch of artists has been announced for the 30th Up the Creek festival which will be held at the Breede River outside of Swellendam from 6 to 9 February 2020...

The lineup for the main programme of the National Arts Festival has been unveiled. The annual arts festival will be held in Makhanda (formerly Grahamstown) from 27 June to 7 July 2019...

And the nominees for the 54th Fleur du Cap Theatre Awards are...Article

The nominees of the 54th annual Fleur du Cap Theatre Awards have been announced. This year's ceremony will take place at the Artscape Opera House in Cape Town on Sunday, 10 March 2019...

Jesters in the Park will be held at the Maynardville Open-Air Theatre in Wynberg, Cape Town from 31 January-2 February 2019.

What's on stage at the 2019 Maynardville Open-Air FestivalArticle

South Africa's #SaveWater mascot Splash is scarier than the droughtArticle

While the City of Cape Town is using apps, Twitter campaigns and Mmusi Maimane's bucket delegation skills to remind South Africans to save water, the nation's Department of Water and Sanitation is taking a - ahem - different approach...

Comedy at the Maynardville Open-Air FestivalArticle

From 18 January to 3 March 2018, Cape Town's annual Maynardville Open-Air Festival will showcase a season of symphony, ballet, comedy and more weaving elements of Shakespeare into a selection of shows.

This year, the Wavescape Surf & Ocean Festival will focus on women in its ocean-conscious event line-up. From 20 November to 10 December 2017, Wavescape will showcase the talents of female scientists, artists, photographers, and activists who use the ocean as their muse to advocate change

The Comedy Central Famous Last Words charity gala event will be held at the Theatre of Marcellus at Emperors Palace in Johannesburg on 4 October 2017.

This week real life is transformed into reel entertainment on the big screen with; Dunkirk, Van Der Merwe, Nina, Viceroy's House and Goya - Visions of Flesh and Blood.

Ten reasons to get to the National Arts FestivalArticle

The 52nd Fleur du Cap Theatre Awards has announced this year's nominees, with the ceremony to take place on Sunday, 19 March, at the Artscape Theatre, Cape Town. 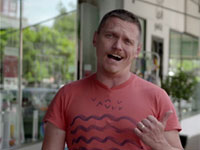 When digital agency Liquorice and their client, Unilever, wanted to create a fun, entertaining way to teach food lovers about better burger-making, they approached The Brave Cartel.

The 4th Annual Armchair Comedy Festival, in association with Fruit of the Loom, showcases performances by top, local comedians from 1 December-11 December 2016 at the Arm Chair Theater in Observatory, Cape Town.

From fresh, edgy works to crowd-pleasers, the Cape Town Fringe's 2016 programme is jammed with theatre, music, physical performances, comedy and family fare in a 17-day theatre binge from the 22 September-8 October.

Fringe stages acts at Superbalist is Rocking the DaisiesArticle

Superbalist is Rocking the Daisies, set to take place from 6-9 October 2016 at Cloof Wine Estate, Darling, has added a lineup for The Lemon Tree Theatre, Bridges for Music Stage and the Hemp Stage.

Five South Africans have been nominated for the 2016 Savanna Newcomer Award. The winner will be announced at the sixth Annual South African Comics' Choice Awards on 3 September at the Teatro at Montecasino...

The Savanna Comics' Choice Awards returns on 9 May, 2016, and is presenting the First Laughter Bank.

Alongside Discop Africa, the pan-African multiplatform television industry gathering being held at Sandton Convention Centre from 4-6 November 2015, is the newly launched 'Meet Your Stars'...

Michaela Mycroft, aka Chaeli, has Cerebral Palsy and a degenerative neuropathy. This, however, has not stopped her from achieving great things thus far. Chaeli will embark on an incredible adventure by climbing Mount Kilimanjaro...

The Sound On Screen Music Film Festival will be held from 31 July to 2 August, 2015, at the Labia Theatre, 68 Orange Street, Cape Town.

The nominees for the nine categories in The 5th Annual Savanna Comics' Choice Awards, which are awarded by comedians on their peers, have been announced.

Picture a musical with two rival gangs led by Rob van Vuuren and Kagiso, two of South Africa's best funny guys, each extolling the virtues of the new Savanna bottle...

The Cape Town Comedy Strip, an idea of Mamello 'Mum-z' Mokoena, has been launched on Cape Town's famous Long Street. The Strip is a hub of different venues on Upper Long Street, hosting stand-up comedy evenings on different nights of the week and will feature local and international comedians.

takealot.com, the headline sponsor for the Cape Town 10s, 2015, has named its media and celebrity team, which will be participating in the tournament.

The full-line up of Rocking The Daisies festival, which will be held from 2 to 5 October, 2014, at the Cloof Wine Estate in Darling, Western Cape has been announced.

Kalk Bay Theatre celebrates its 10th birthday from 11 to 15 March with a week of one-off performances from some of South Africa's top artists.

The nominees for the prestigious 49th annual Fleur du Cap Theatre Awards have been announced. Prizes will be presented to the winners at a glamorous event that will be held at the Baxter Theatre in Cape Town on Sunday 16 March at 6pm.

One of SA's foremost satirical artists, Brett Murray, received the highest bid of the night at the Wavescape Art Board Charity Auction held in Woodstock, Cape Town recently. Selling for R55 000, it broke record highs for any board sold at the surfing festival auction in the last decade.

Ray-Ban will be hosting OneSight Acoustics at the Backsberg Wine Estate near Paarl in the Western Cape on Saturday, 23 November to raise money which will go towards the annual vision clinics hosted in South Africa.

On the heels of an internationally recognised and sold-out 2012 festival, Rocking the Daisies announces another stellar 2013 line-up featuring four days of acts across seven official stages.

The English productions on offer at this year's Clover Aardklop National Arts Festival, held in Potchefstroom, are all highly acclaimed and award-winning shows.

South Africa's comedians have voted, and the nominees in each category have been selected for the 3rd Annual South African Comic's Choice Awards. Now winning a prestigious Waldo is no longer a dream, but a one in four chance for each nominee.