13 Sep 2019 | Email | Print |  PDF
Repressive governments use sophisticated digital censorship and surveillance alongside more traditional methods to silence independent media.
Eritrea is the world's most censored country, according to a list compiled by the Committee to Protect Journalists. The list is based on CPJ's research into the use of tactics ranging from imprisonment and repressive laws to surveillance of journalists and restrictions on internet and social media access.

Under Article 19 of the Universal Declaration of Human Rights, everyone has the right to seek and receive news and express opinions. These 10 countries flout the international standard by banning or severely restricting independent media and intimidating journalists into silence with imprisonment, digital and physical surveillance, and other forms of harassment. Self-censorship is pervasive.

The 10 most censored countries:

In the top three countries - Eritrea, North Korea, and Turkmenistan - the media serves as a mouthpiece of the state, and any independent journalism is conducted from exile. The few foreign journalists permitted to enter are closely monitored.

Other countries on the list use a combination of blunt tactics like harassment and arbitrary detention as well as sophisticated surveillance and targeted hacking to silence the independent press. Saudi Arabia, China, Vietnam, and Iran are especially adept at practicing these two brands of censorship: jailing and harassing journalists and their families, while also engaging in digital monitoring and censorship of the internet and social media.

The list addresses only those countries where the government tightly controls the media. The conditions for journalists and press freedom in states such as Syria, Yemen, and Somalia are also extremely difficult, but not necessarily attributable solely to government censorship. Rather, factors like violent conflict, insufficient infrastructure, and the role of non-state actors create conditions that are dangerous for the press.

How censorship works: The government shut down all independent media in 2001. Eritrea is the worst jailer of journalists in sub-Saharan Africa, with at least 16 journalists behind bars as of December 1, 2018; most have been imprisoned since the 2001 crackdown, and none received a trial.

According to freedom of expression group Article 19, the 1996 press law includes a requirement that the media must promote "national objectives." The state retains a legal monopoly of broadcast media, and journalists for the state media toe the government's editorial line for fear of retaliation.

Alternative sources of information such as the internet or satellite broadcasts of radio stations in exile are restricted through occasional signal jams and by the poor quality of the government-controlled internet, according to DW Akademie. Internet penetration is extremely low, at just over 1% of the population, according to the U.N. International Telecommunication Union. Users are forced to visit internet cafes, where they are easily monitored.

A March 2019 report by the Collaboration on International ICT Policy for East and Southern Africa suggests that the authoritarian state is so "brutal or commanding" as to "render ordering overt internet disruptions unnecessary." However, on May 15, 2019, the BBC reported a social media shutdown in Eritrea, ahead of the country's Independence Day celebrations. With the opening of the border with Ethiopia in mid-2018, some foreign journalists received special accreditation to visit Eritrea, according to The Economist, but access was tightly controlled.

Lowlight: As many as seven journalists may have perished in custody, according to reports that CPJ has not been able to confirm due to the climate of fear and tight state control. The government has refused all requests to provide concrete information on the fate of imprisoned journalists. In June 2019, more than 100 leading African journalists, scholars, and rights activists wrote an open letter to Afewerki, asking to visit long-imprisoned journalists and activists; this request was soundly rejected, and deemed "inappropriate" by Eritrea's Ministry of Information.

How censorship works: The government maintains a tight grip on how and what journalists report in Equatorial Guinea. All broadcast media are government owned, except for RTV-Asonga, a network owned by the president's son, Teodoro Nguema Obiang, who is also the country's vice president. Local and international broadcasters have been banned from covering certain subjects deemed threatening to the image of the country or those close to the president.

While privately owned newspapers do exist, journalists work under threat of prosecution for coverage deemed critical of the president, his family, or the government in general, and thus frequently self-censor, according to a June 2019 report by Civicus. Websites of foreign news outlets and the political opposition are among those regularly blocked, according to an October 2018 civil society submission to the U.N. Universal Periodic Review. The 1997 Press, Printing and Audiovisual Law restricts journalistic activity, including allowing for official prepublication censorship, and defamation and libel remain criminal offenses under the penal code, according to Civicus and Freedom House's Freedom of the Press report.

In November 2017, the internet was shut down on the day of voting for parliamentary and municipal elections, and Facebook was blocked for about three weeks prior to the vote, according to news reports and civil society group EG Justice.

Lowlight: In September 2017, cartoonist Ramón Nsé Esono Ebalé - who had been living in exile - was arrested by Equatorial Guinean authorities while in the country to renew his passport; he was interrogated about his drawings and blog that featured critical commentary on the president, and imprisoned for six months on false charges of money laundering and counterfeiting. After his release in March 2018, the authorities refused to renew his passport for several months, preventing him from returning home to his wife and child in El Salvador. 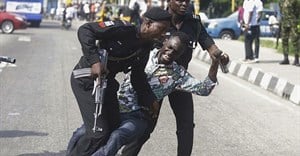