22 Apr 2021 | Email | Print |  PDF
New York Festivals Radio Awards has announced the appointment of award-winning global storytellers Jennie Caltaldo, Helen Shaw and Carole Zimmer to its Radio Awards Advisory Board.
The 13-member Advisory Council, formed in 2010, is an impressive brain trust of some of the most innovative content creators and thought-leaders within the radio industry. They generously provide NYF’s Radio Awards competition with ongoing knowledge of emerging trends and critical industry insights.

“I am honoured to be involved with the New York Festivals Radio Awards Advisory Board. Recognising and applauding great work supports and empowers talent within the industry. I look forward to assisting in the celebration of new and inspiring audio,” says Jennie Cataldo, Radio & Podcast producer, vice president of Programming at BMP Audio.

Cataldo is an award-winning radio and podcast producer living in San Francisco. Mentored by renowned radio producer Ben Manilla, she joined Ben’s company BMP Audio in 2011. During her time at BMP, she has produced a variety of audio content including radio programs, documentaries, series, specials, and podcasts working with celebrity host talent and has produced work for clients such as the United States Library of Congress and the Country Music Hall of Fame and Museum. Her productions have aired on national and international networks.

“It's an honour and pleasure to be invited to join the Radio Advisory Board of the New York Festivals. As a programme maker, and a lover of audio storytelling, I know how important the New York Radio Festival is in celebrating the art of radio and audio podcasts. I've enjoyed both participating in the festival as an entrant, and being part of the Grand Jury, over the past ten years and I am looking forward to contributing to the ongoing success of the Festival and ensuring its relevance to both practitioners and listeners in the future,” says Helen Shaw, founder/director of Athena Media.

Shaw is an award-winning producer/director. She runs Athena Media, in Ireland, a digital and broadcast storytelling agency that creates award winning podcasts and runs Podcasting Ireland. She has worked as a news reporter with the Irish Times and worked as a current affairs producer with RTE, as editor of news and current affairs at BBC Northern Ireland before taking up the post as Head of RTE Radio, Ireland's public broadcasting service. She ran RTE Radio for five years, launching RTE Lyric FM and leading RTE’s digital transformation before taking a sabbatical at Harvard University.

“The New York Festivals is a magnet for some of the best produced radio programming in the world. The awards they present are highly coveted and it is an honor journalists and creators covet,” says Carole Zimmer, journalist and host of 'Now What?'

Zimmer, reporter-at-large, is the host of the podcast “Now What?” about big life decisions, transitions and how you navigate all those curves in the road. She worked at Bloomberg Multimedia as a digital video and television producer as well as a radio reporter for 15 years and is the recipient of numerous awards including the Edward R. Murrow award for her radio documentary “Stalking a Silent Killer.” Before joining Bloomberg, she worked at NPR and the CBS and NBC radio networks. As a reporter-at-large she has been a contributor to the New York Times, Washington Post, Harper’s, and other publications.

The Radio Awards receives entries from radio stations, networks, and independent producers from over 30 countries around the globe. The mission of the competition is to honor the achievements of the men and women who make up the global audio storytelling community.

This year is the eleventh year of NYF’s strategic partnership with NAB Show, the ultimate marketplace for people passionate about media, entertainment, and technology. All attendees will have access to the multi-day NAB event which is the world’s largest media entertainment marketplace taking place in October 2021.

The deadline to enter the 2021 Radio Awards competition is 20 May 2021. Click here to enter. For additional information visit: Rules and Regulations. 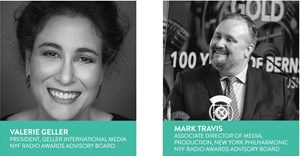