On 25 February the South African National goalball champions team played a demonstration game on the NWU’s Mahikeng Campus to introduce the sport to students.

According to Jim Molautsi, director of Student Life, one of the department’s goals is to create a culture that celebrates diversity and enhances social cohesion.

“We can do more to include students with disabilities in our student life co-curricular offerings, and therefore we decided to introduce goalball in 2022,” he explains.

Vida Mutlaneng from the Disability Rights Unit (DRU) says students are excited and keen to start practicing and competing.

“The introduction of goalball has emphasised the importance of including students with disabilities in sports, and this is a great achievement for the DRU,” says Vida.

"I enjoyed the game very much – it made me realise that I can do many things, no matter what the circumstance,” says Tshidisegang Mothobi, a first-year student.

Solomon Mutlaneng Jr says it was a wonderful experience to learn about the sport and to participate.

“Being there made me realise that living with a disability should not stop you from being active," he adds.

Goalball is a game played by two teams of three players each, with each side having a maximum of three substitutions.

The game is played indoors on a court of 18m by 9m, divided by a centre line. The aim of the game is to try to throw a ball that has bells embedded in it into the opponents’ goal.

The ball is thrown by hand and never kicked, and teams alternate throwing or rolling the ball from one end of the playing area to the other, while players remain in the area of their own goal in both defence and attack. A game consists of two 12-minute halves with a three-minute half time.

The International Blind Sports Federation is the official governing body for the sport. Goalball players in action during the demonstration game on the NWU’s Mahikeng Campus. The NWU mascot, Eagi, is eager to learn about goalball 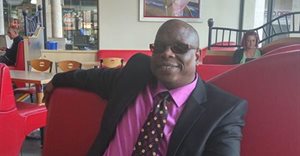