Master Harold and the Boys

By: Eugene Yiga
From its Broadway debut in early 1982, Athol Fugard's Master Harold and the Boys has been awarded many times and adapted twice for film. Now, more than 30 years after the play first appeared (and was initially banned in South Africa), it is being staged at Cape Town's Fugard Theatre.
The story takes place in a Port Elizabeth tearoom on a rainy day in 1950. It's here that we meet two black servants and their white employer's son, spending the afternoon reminiscing about the past, debating about the present, and dreaming about the future. "It seems an impossible dream, both in the world of the play and in the real world in which it was written," said director Kim Kerfoot (Fleur du Cap nominee for Statements After an Arrest Under the Immorality Act). "By attempting to create something fragile and beautiful with this production, we carry these dreams forward."

Fragile and beautiful is an apt description. Given the setting (and the fact that this is Fugard), there is some tension in the relationship between "Master Harold" and the men he treats as boys (even though they've been better parents to him than the negligent and possibly abusive ones he already has). And even though the writing is so beautiful and so rich, it's sometimes a little painful to hear and hard to watch. Still, even when things get particularly heavy, there's always the hope that it will work out and that they'll finally learn the steps to the dance we call life.

A coming of age in more ways than one

Produced by Eric Abraham (The Blue Iris) and designed by Julia Anastasopoulos (Champ), this staging stars Themba Mchunu as Willie (who offsets the serious moments with his comic attempts at preparing for a ballroom competition) and Tshamano Sebe as Sam (reprising the role that won him a Fleur du Cap Award for Best Actor in 1999). The troubled teen is played by 16-year-old Alex Middlebrook, who has already appeared in various Artscape productions, but is making his professional debut in this role.

He certainly deserves to be applauded for his performance. Despite some early shakiness (perhaps understandable given that his classmates were in the audience), he soon settled in and opened up. The scenes of him talking on the phone stand out as particularly powerful, not just because Middlebrook was performing on par with people twice his age, but because precocious Harold was finally seen as a child in pain. It really is a coming of age in more ways than one.

Master Harold and the Boys is at Cape Town's Fugard Theatre until 30 March. Tickets are available from Computicket or by calling the Fugard Theatre box office on +27 (0)21 461 4554. Generous discounts are available for Friends of the Fugard, which you can sign up for by calling the box office or by going to www.thefugard.com.
NextOptions
›
Email Print PDF
Follow 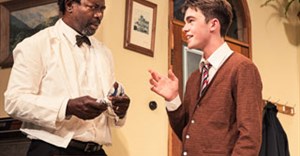