Should I stay or should I go? Synovate survey reveals South African attitudes towards emigration

22 May 2008 | Email | Print |   PDF
Issued by: Ipsos
According to a recent survey by global market research company, Synovate, 20% of South Africans are definitely planning on emigrating or seriously considering it.

“This is not really a surprise,” states Jake Orpen, Group Client Services Director at Synovate. “South Africans are not in the best frame of mind lately, due to the obvious political uncertainty, economic instability and electricity problems! Synovate's aim was to quantify the current threat of emigration.”

The option to emigrate is most popular amongst young and middle-aged aged South Africans (18-44 years), which is concerning because this age group represents South Africa's current and future skills set. 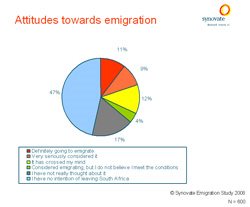 Rand Merchant Bank's Senior Economist, Ettienne Le Roux states that “the obvious negative for any country experiencing high levels of emigration is the loss of skills and the future income these skills would have generated. If emigration is not matched by immigration of people of at least the same skill, the country will no doubt be worse off. In this regard, it is encouraging that the South African government is showing preliminary signs of making it easier for skilled foreigners to come and work in our country.”

Considering the expense of emigrating and the cost of living overseas, one has to question whether, or not, these attitudes are realistic. What actions have been taken to translate the intention to emigrate into a reality? 9% of the respondents surveyed have made or intend to make a formal application for residency or work in another country and 3% already have a job lined up.

Regardless of intention, South Africans were asked whether, given the costs and requirements of emigrating, they would be able to successfully emigrate. 27% of South Africans believe that they could, while 51% of respondents said they would not be able to afford it and the remainder were unsure. Those who said they would be able to successfully emigrate believe that they would have the required funds and that they are well qualified. According to a recent FNB survey, emigration has been cited as the biggest single reason for selling upper end properties.

Le Roux states that "being able to afford the significant relocation costs as well as other costs associated with emigration (house, car etc) is one thing. Having to sustain the high living standards abroad that South Africans have become accustomed to locally, is a completely different thing.”

The USA emerged as the most popular choice of destination, followed by the UK, Australia and New Zealand respectively.

When looking at the motivations for considering emigration, the overriding pull is business and employment opportunities (88%); while violence, crime and corruption is the key push factor (55%). Itchy feet and the desire to explore a new country and experience different cultures were also cited by more than a third of those considering emigration. Other push factors mentioned were South Africa's volatile economy and the cost of living (19%), government problems (13%) and infrastructural concerns (6%). Family reasons (14%) such as joining extended family abroad and better education for children were also mentioned. 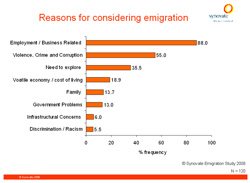 A third of the respondents surveyed state that they know someone who has emigrated from South Africa in the past five years. Similar to the reasons cited by those considering emigration, those who have emigrated were perceived to have left for work or crime related reasons.

Not everyone interviewed wanted to leave the country. In fact, a hefty 47% have absolutely no intention of leaving South Africa and a further 17% state they haven't really thought about it.

All respondents were quizzed on the things they love about South Africa. The climate and nature came out tops - with 46% percent of South Africans pointing to either of these as the main attraction. 18% of respondents love the South African people. 15% pointed to the freedom we have been granted and 14% to the diverse cultures that exist in our country. Just over a tenth loves South Africa because it is home to family and friends.

A difference between the races was observed here. Whilst whites cite the weather, nature, family and people as reasons to love our country, black respondents spoke more about South Africa having diverse cultures.

“It is a positive sign that despite all the current doom and gloom, the majority of South Africans do not want to leave,” says Le Roux. “Clearly, for these people, the positives of living in South Africa (climate, people, wildlife) still outweigh the negatives.”

“Tracking the intended movements of South Africans is of importance from a business point of view,” concludes Orpen. “It is also quite possible that knowing where people sit with the notion of emigrating in order for South Africans, as a society, to prevent the brain drain in years to come.”

600 respondents were interviewed in all nine provinces of South Africa using face-to-face interviews. Results were weighted to ensure representation across province, age, gender and race.