The Covid-19 pandemic and nationwide lockdown has compounded the effects of existing gender inequalities and led to an increase in violations of women's rights, including elevated risks of domestic violence and other forms of GBV...

Vodacom steps up to fight against GBVArticle

Vodacom launched a campaign called 'Be the light' to call everyone's attention to the scourge of GBV in South Africa...

Gender-based violence (GBV) in South Africa has been a widespread problem, which disproportionately affects women and girls. It is seemingly systemic and deeply entrenched in institutions, cultures and traditions in South Africa...

#DI2020: Why technology is nothing unless it touches someone's lifeArticle

Creative director of Google Creative Lab Robert Wong says the first thing to remember when it comes to technology is that if how we live is being shaped by technological companies like Google, it is important for humanity to be involved...

I've curated four examples of experiences created using technology or a combination of technology and tactile, to give you ideas to use in your industry to capture the attention, or rather the adoration, of customers... 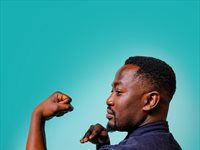 To mark Deaf Awareness Month, MTN enlisted TBWA and Fort to work on a special piece aimed at highlighting the *130*3272*29# emergency number. TBWA and Fort then produced a special track with Lazarusman, which is only in sign language and has a beat that was produced specifically for deaf people. To add to the visual aesthetics, TBWA and Fort also commissioned well-known photographer Lee Roy Jason, who photographed the photo stills that was attached to the campaign as a whole. The video is part of MTN's effort at spreading awareness around Deaf Awareness Month as well as their emergency number, *130*3272*29#, aimed at assisting both people of hearing and the deaf community. The song came with a beat that was produced specifically for deaf people, using production techniques that allow the deaf community to feel the beat in the absence of hearing it.

TBWA and Fort recently produced a music video for MTN and Lazarusman’s “Defbars” – a song that only uses sign-language. The video is part of MTN’s campaign for Deaf Awareness Month, which is aimed at spreading awareness of the emergency number *130*3272*29# . The song came with a beat that was produced specifically for deaf people, using production techniques that allow the deaf community to feel the beat in the absence of hearing it.

I Love Coffee empowers the hearing-impairedArticle

Every September, Deaf Awareness Month aims to highlight hearing-impaired people, the challenges they face and the accomplishments they have achieved...

Nosipho Mngoma, a hearing-impaired pastry chef, has overcome the odds to pursue her dream as a pastry chef at Park Inn by Radisson Newlands in Cape Town...

Park Inn by Radisson Cape Town Newlands, in partnership with the Deaf Federation of South Africa (Deaf SA), will once again dedicate itself to the hard-of-hearing agenda during September with its #Signtember campaign for International Month for Deaf People...

I Love Coffee, a Cape-based social enterprise that trains and employs deaf baristas to work as frontline staff in its stores, plans to open as many as five new outlets over the next twelve months...

Cost-effective solutions to help deaf people navigate healthcare in developing countries is exactly what Banele Mhlongo and Vuma Mthembu are trying to achieve with the app they are developing...

Just like the adrenalin and anticipation you feel before going on a rollercoaster, so were the TEDxCapeTown speakers waiting to present their talks to an excited audience on 15 October at Ratanga Junction...

In a world where most people are just looking to get ahead, there are the few who find purpose in helping others get there. Protea Hotels' training manager, Nancy Gaylard is one of those who have a passion for mentoring and helping others become the best they can be...

Hundreds of jobs for the deaf thanks to joint ventureArticle

More than 400 deaf and hearing-impaired people nationwide have found an opportunity for gainful employment within the Shoprite Group, thanks to the retailer's Decade of the Deaf Project in partnership with Employ and Empower Deaf (eDeaf) over the past six years...

Building on the success of its initial Lobola Calculator app, released in October 2014, Friday 13 March will see the release of the improved version by developers, Digital Peppa...

The Pan South African Language Board (PanSALB) has welcomed the approval to allow hearing impaired pupils to choose sign language as a first language.

New mobile apps being developed for the deafArticle

Researchers at the University of the Western Cape in South Africa are developing mobile applications that will revolutionise the way deaf and hearing people communicate. They are working on several interconnected projects and programmes focusing on cellphone or mobile applications with the ability to translate spoken language into sign language and vice versa.

NEWSWATCH: Independent head Iqbal Survé says the group's editorial staff are assured of their editorial freedom, and need have no fear when writing about any company within the Sekunjalo Group, reports Mail & Guardian, which also reports the government has admitted - shock and horror - to making a mistake.

Business and Arts South Africa (BASA) has announced the nominees for the 14th Annual Business Day BASA Awards, supported by Anglo American, which pay tribute to those businesses who are actively making a difference by sponsoring arts and culture events throughout the country.

Following the Portfolio Committee on Communications meeting held on 20 April 2011, the SABC and DeafSA met on Friday 6 May to discuss how to make programmes, news bulletins and sport programmes accessible to the deaf through subtitles and South African sign language interpreters.

A ground breaking production of Pictures of YouArticle

When I went to see Pictures of You, I had no idea what to expect. I am unabashedly lazy and I will gladly admit that I did no research on it. So I was pleasantly intrigued when a little speech was given before the show started and we were given a bit of background. Also mention worthy was the fact that Premier Helen Zille was in the audience.

HIV campaign for deaf on TVArticle

Brothers for Life (B4L), a national men's campaign, is providing HIV prevention information to South Africa's deaf population on TV in November 2009 through a minute of silence. During this time, Eric Mahamba from Khayelitsha will sign a message to viewers.

The Shoprite Group yesterday, 19 May 2009, announced the first graduation class of 38 deaf learners who have completed a four month Sales Skills Programme and who are now employed in Checkers stores in Gauteng.

An innovative computer programme that allows deaf people to translate English into sign language - and vice versa - has won two students from the University of the Western Cape a place in the final of a global technology competition in Egypt next year.

Currently a small group of deaf or hard of hearing people nominated by DeafSA are testing subtitling software on the DStv personal video recorder. They form part of a field trial before final review of subtitling software is released to the broader customer base.

At a special briefing of the South African press Thursday, Charles van der Straten Waillet, World President of the International Public Relations Association (IPRA), announced that, Magna Carta PR agency was one of the gold winners in the overall 'institution' category at the 2005 IPRA Golden World PR Awards for their integrated campaign, "Makoya Moola: Rands You Can Trust", on behalf of the SA Reserve Bank.