Top 10 African stories to watch on Netflix this #AfricaDay

25 May 2020 | Email | Print |  PDF
The past two decades have seen an upsurge of stories told from indigenous and diverse perspectives of the many tribes and cultures of Africa - putting the continent and her creative industries on the global map. The ensemble of actors, directors, producers and scriptwriters have lived up to the fanfare, creatively and fearlessly showcasing our backgrounds, as well as languages and cultures in a way that is unique to who and what we are.
Africa Day, 25 May, gives us an opportunity to appreciate the creative freedom of African stories through the plethora of content currently streaming on Netflix.

Be it the comedic stylings of Tumi Morake, Loyiso Madinga, Loyiso Gola and Riaad Moosa;  the dramatic genius of director and showrunner, Kagiso Lediga; or the Oscar-winning vision of film director Gavin Hood; and the stars that bring it all to life - Pearl Thusi (Queen Sono), Presley Chweneyagae and Terry Pheto (Tsotsi), S’Dumo Mtshali and Warren Masemola ( iNumber Number); there is a host of content from the region to satisfy your every streaming craving.

Top 10 picks of proudly African stories to enjoy on Netflix, on Africa Day:

The action-packed series follows Queen Sono, the highly trained top spy in a South African agency whose purpose is to better the lives of African citizens. While taking on her most dangerous mission yet, she must also face changing relationships in her personal life.

Nnamdi Okeke, son of Andy Okeke from Living In Bondage 1,1 is an ambitious young man who wants more out of life. Snag is, he can't afford the kind of life he wants with his current income. An encounter with Chief Ibaka,  a family friend with a notoriously dark past, opens the door to all he has dreamt. But it all comes at a great price, that will change his life forever.

Comedians of the World

Netflix takes stand-up South Africancomediens Tumi Morake, Loyiso Madinga, Loyiso Gqola and Riaad Moosa global with this series that features a diverse group of comics from 13 regions around the world. Dozens of comics perform, bringing their unique perspectives of what is funny.

Chili and Sello, undercover cops, are cheated out of a large reward by their corrupt superiors. Chili infiltrates a gang as it prepares to rob an armoured car, and instead of busting them, he convinces Sello to participate in the score.

The Boy Who Harnessed The Wind

A 13-year-old boy is thrown out of the school he loves when his family can no longer afford the fees. He sneaks into the library and learns how to build a windmill to save his village from famine.

Tsotsi, a young street thug, steals a car only to discover a baby in the back seat and spends six days in a violent and agitated situation which leads to an emotional bond towards the end.

In the Cape Flats, a newly released ex-con exacts revenge and triggers a gang war, sending ripples through the life of a 13-year old chess prodigy.

A former footballer tries to make it as a player agent in the world of African soccer, but a secret from his past threatens to destroy everything.

When a billionaire industrialist unexpectedly drops dead, his money-crazed family, friends, and staff scramble for their share of his fortune.

Amidst poverty and struggle, a hardened pantsula dance leader enters a dark space and searches for redemption and salvation in his community.

Four professional women lean on each other for support in their often confusing and volatile journey to motherhood.

Looking to prove her worth, a woman steps up to the challenge to work with her crude and eccentric brother when her father, Chief Ernest Obiagu, is forced to take a step back due to health issues. 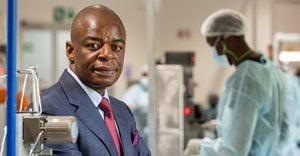