I Don't Work On Sundays

By: Eugene Yiga
After a sold-out season earlier this year, comedian Marc Lottering is back with I Don't Work On Sundays at Cape Town's Baxter Theatre. Judging by the non-stop laugher that left many people barely able to contain themselves, adding some extra performances might be required! This is the first time in a while that Lottering performs without his crazy characters. It's just him on stage, wearing a funky green suit and sharing his thoughts about life. He doesn't get caught up in sensitive political issues; instead, he focuses on the everyday stuff like ATMs, Christmas carols, dog whisperers, Lux soap, Woolworths, newspapers, and Fifty Shades Of Grey.

It might seem impossible to find humour in so many random things, but Lottering somehow gets us to relate. "If you tell a story, even about growing up in Retreat, you kind of learn to make the story funny for everybody," he says. What's more, he manages to tie it all together into some good advice about taking time off and finding reasons to be happy with life. And more than just making you laugh, this show will make you smile as well.

Lottering, who worked as a Baxter Theatre usher when he was a student at the University of Cape Town, began his professional stand-up career almost 15 years ago. And even though he's done a variety of shows (including pantomimes, musicals, and plays), being a comedian is what he loves most. "That's what I do," he says. "I still love telling a funny story, I still love hearing people laugh and laughing along. That makes me very, very happy."

His material comes from the time he spends observing other people, listening in on conversations and seeing what comes up. "I like to let my mind just go crazy and not place limits on myself if there is an opportunity for a funny story," he says. "My mind only does that when I'm not working at night, so that usually happens on a Sunday."

Speaking of Sundays, where did the show's title come from? Well, while he was under pressure to come up with a name earlier this year, his phone wouldn't stop ringing. "Don't they know I don't work Sundays?!" he exclaimed. And so it goes. Unlike the ironic scheduling in the Joburg run that required him to work on Sundays, Lottering at least gets the day off this time. Given how well he performs on the other six days of the week, the man deserves it!

I Don't Work On Sundays (PG16) is at Cape Town's Baxter Theatre until 5 January 2013 (including a special New Year's Eve show). Tickets are available from Computicket. For more information, go to www.marclottering.com.

Eugene graduated from the University of Cape Town with distinctions in financial accounting and classical piano. He then spent over two-and-half years working in branding and communications at two of South Africa's top market research companies. Eugene also spent over three-and-a-half years at an eLearning start-up, all while building his business as an award-winning writer. Visit www.eugeneyiga.com, follow @eugeneyiga on Twitter, or email moc.agiyenegue@olleh to say, um, hello.
Read more: marc lottering, Mark Lottering 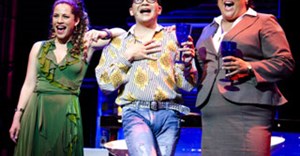