By: Daniel Dercksen
Felix is a delightfully charming new South African film we can all be proud of. Filled with heartfelt honesty, sincere passion, and grounded in a story we can all share compassionately, producer-director Roberta Durant delivers a meaningful and rewarding local film we have all been waiting for. 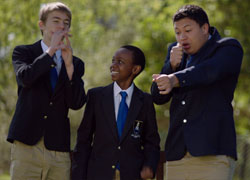 Showing how music can heal wounds and reconcile the differences that separate, it tells of 14-year-old Felix Xaba, who dreams of becoming a saxophonist like his late father, but his mother Lindiwe thinks jazz is the devil's music. When Felix leaves his township friends to take up a scholarship at an elitist private school, he defies his mother and turns to two ageing members of his father's old band to help him prepare for the school jazz concert. With Felix, the legacy of a New South Africa and our Rainbow Nation shine hopeful and bright.

Shirley Johnston's poignant script, filled with humanity, compassion and refined humour, vibrantly comes to life. Its vivid characters showcase the diversity of South African culture and explode with noteworthy performances from Hlayani Junior Mabasa in the title role, with an equally moving performance from Linda Sokhulu as Felix's mother, who is torn between the love for her son and the haunting memories of her jazz musician husband who tainted her happiness.

Equally brilliant is Dame Janet Suzman as Felix's favourite teacher, Mrs Cartwright, with great support from Andre Jacobs as the stalwart music teacher, and Adrian Galley as the Headmaster. Thapelo Mofokeng is sensational as Bra Joe, Felix's music mentor who instils a passion in the aspirant jazz player, with Royston Stoffels in top form as the enigmatic Fingers who helps to shape Felix's dreams. There are also solid performances from Felix's best buddies, played with fervour by Joseph Hughes and Joshua Wyngaard, and his siblings, delightfully performed by Elvis Mahomba and Okwethu Banisi.Nicholas Ellenbogen is an absolute delight as Mr Soames, an affluent wealthy compassionate supporter, with memorable support by his canine friend Horace. 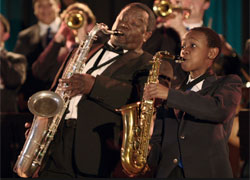 The soul of Felix and its emotional impact is evident in the superb music score by Murray Anderson, who has recorded hit albums for Cape jazz icons like Abdullah Ibrahim, Robbie Jansen and Basil "Manenberg" Coetzee, and composed over 40 pieces of original Cape jazz for Felix. Anderson perfectly captures the dynamics of Cape jazz, musically unique with its blend of a mix of cultures and influences, including slave songs, marching bands, and Christian hymns. For Felix, Murray brought together a stellar line-up of old and emerging Cape jazz legends who supported the actors in bring their characters alive through music. These included Mark Fransman, the 2008 Standard Bank Young Artist of the Year, on saxophone and pennywhistle; Bokani Dyer, the 2011 Standard Bank Young Artist of the Year, on piano; triple 2012 SAMA nominee Lwanda Gogwana on trumpet; Wesley Rustin on the upright bass; and Kevin Gibson on drums.

It's music you will definitely remember and a soundtrack worth investing in. What makes a film great is not only how the story is told, but the emotional journey it triggers. The emotional colour that Felix evokes reflects a meaningful universal experience that is imbedded in everyone, and feelings that we can respond to with understanding. The richness of township jazz, the education of youths in South Africa, broken families and lost youth are relevant issues that pulsate with vigour in Felix.

Described as "Billy Elliott with African jazz", Felix is more than a film; it's a reminder of that friend we all remember, the one who lived on the outskirts of our lives and one we never bothered to be acquainted with. If you are looking for a story that embraces the humanity of South Africa at its most diverse, and captures the rhythms of Cape Town, make sure to befriend Felix. It's vibrant, colourful, and charming, and will definitely capture your heart. It's an enduring friendship that you will remember for a long time and one that you will want to share with friends and loved ones.

Felix is the first South African film written, directed, shot and line produced by women since Elaine Proctor's Kin 12 years ago. Based on Shirley Johnston's acclaimed script, which won Sithengi's 2004 Writer's Forum Award; was a finalist in the US Specscriptacular Competition; and was a quarter-finalist in both Francis Ford Coppola's American Zoetrope Screenplay Contest and the Moondance Screenwriting Competition, the film is produced and directed by SAFTA Lifetime Achievement winner Roberta Durrant, who co-founded both Penguin Films and Paw-Paw Films, and was the creative producer on the feature films Inside Out and Skilpoppe, as well as on the International Emmy-nominated TV series Home Affairs, Stokvel and Sokhulu & Partners.

Natalie Haarhoff, who shot the Emmy-nominated Orphans of Nkandla and the BAFTA-nominated Lost Girls of South Africa, is the director of photography, while Kate Schalk is line producing her debut feature film. Roberta said she approached the film as a fable: "I'm hoping watching the film will remind people of paging through a children's book. We've gone for a symmetrical, almost naïve look; it's not quite a fairy tale, but it's definitely a fable." Traditional wisdom is never to work with children or animals on films, but Roberta said that directing the child stars was her personal highlight. "I loved working with these children," she said. "I can't begin to tell you how fantastically fulfilling and rewarding it was; they've been wonderful. They are so in the moment and they give it 300%. Watching them has reminded me how the creative process should be about playing." 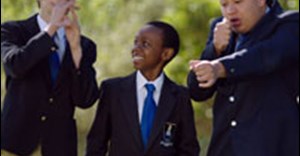