Honouring an icon in Biko's Quest

By: Eugene Yiga
Last year marked what would have been anti-apartheid activist Steve Biko's 65th birthday. As part of the celebration, the Steve Biko Foundation created Biko's Quest. The show enjoyed a successful run at The Steve Biko Centre in King William's Town last month and will be shown at the Artscape Theatre in Cape Town from 8 to 16 September.

Biko's Quest was inspired by "The Quest for True Humanity", an exhibition commissioned by the Department of Education in 2007 and developed in partnership with the Apartheid Museum. The production, by the Jazzart Dance Theatre, interprets Biko's life and death through song, dance, physical movement, and dialogue.

"In so doing, the production revisits the contemporary relevance of Biko and his quest for a true humanity," said Jongi Hoza, the arts and culture officer at the Steve Biko Foundation. "Through Biko's Quest, we bring you an interpretation of Biko's vision and interrogate how far the South African society has progressed in becoming a nation with a more human face." 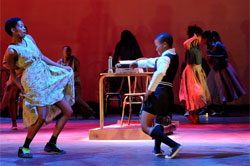 The face of humanity

"Biko said [that] history works through people and we have availed ourselves for history to work through us," said director Mandla Mbothwe. "It was this thought that led [choreographer Jacqueline Manyaapelo] and I to agree to let history work through us and create a piece that explored the face of humanity. In the month that marks the anniversary of his death, this is a celebration of his life."

Biko's Quest is showing at the Artscape Theatre in Cape Town from 8 to 16 September. Tickets are available from Computicket. For more information on the Jazzart Dance Theatre, go to www.jazzart.co.za or watch the video below.