By: Eugene Yiga
For over 30 years Andrew Buckland has worked as a writer, performer, and director across theatre, television, and film. In-between teaching at Rhodes University's Drama Department, the recent recipient of a Standard Bank Ovation award for significant and long-standing contribution to the theatre industry has found time to create his first new show in years.
Laugh the Buffalo involves a bumbling secret agent on a secret mission; a whistle blower hiding out at a silent meditation retreat; and a Zen master with elbows for lips. It takes a lot of stamina to portray a host of creatures great and small, but Buckland keeps up the energy, even during some extended scenes.

Attempts to combine visual comedy with political satire can sometimes result in a show that is too slapstick on one extreme or too self-important on the other. But Buckland, who firmly believes that laughter can help us deal with serious matters and that theatre is not meant to distract us from real life, gets the balance right.

His forte is in physical theatre, no doubt enhanced by his experience as a performer with the Cirque du Soleil. And yet the clowning around doesn't stop him from tackling current issues like secrecy and state information, all by using a deceptively simple allegory that feels increasingly relevant to the world we live in today.

Laugh the Buffalo is yet another chance for Buckland to demonstrate his ability to perform on an empty stage and still paint vivid scenes in the audience's mind. While most contemporary entertainment bombards you with predetermined images and no room to add your own ideas, this one requires you to bring your imagination, your kids, or just the child in you. The Ugly Noo-Noo, beautiful theatre5 May 2010 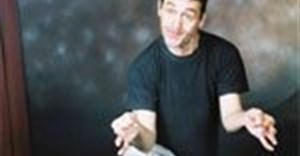