6 Apr 2021 | Email | Print |  PDF
Toyota is being conservative, with its big luxury 4x4. The slow tease of Toyota's new Land Cruiser continues. Although the Japanese company is trying to keep details about the Land Cruiser 300 guarded, there has now been the obligatory patent drawing discovery.
Any automotive brand has to file technical diagrams and drawings with relevant training and patent authorities, and these usually allow for quite a bit of detail to be revealed.

A series of technical drawings, to assist Toyota staff in understanding the new Land Cruiser’s build and fitment, has given a lot of clues to what the new ‘Cruiser will be like inside.

The Land Cruiser 300 exterior will not differ radically, using much of the legacy design language which has established its unique sense of presence. Where the most significant architectural changes are to be had, regard the cabin and ergonomics.

In the realm of automotive digitisation and functions, the market has evolved enormously in the past decade. Something which has generally passed Land Cruiser followers by, as the soon to be retired 200-Series, was launched in the late 2000s.

What is clear from these Toyota technical sketches, is that Land Cruiser 300 will feature a very cleverly configured interior environment. Toyota recognises that its luxury SUV customers are more likely to use their vehicles in testing off-road environments, than virtually any other equivalent brand or model.

To ensure a cabin architecture that is both effortlessly digitised, but also intuitively usable when traversing Kalahari dunes or crawling up Sani pass in winter, Toyota’s industrial designers have blended old with new.

A 12.3-inch touchscreen infotainment system is affixed above the centre console, which should relay most of the entertainment, device pairing and navigation information for Land Cruiser 300. But loyal ‘Cruiser fans will be thrilled that a series of physical knobs and dials have been retained.

Most luxury SUVs are now produced with sweeping touchscreens, controlling virtually all functions. Although the appearance might be fantastically futuristic, the functionality is not ideal when driving off-road.

Controlling HVAC or adjusting in-car entertainment is deeply annoying via a touchscreen interface when you are barrelling along on a bumpy gravel road. Toyota knows this and has decided to include several physical buttons, in its new ‘Cruiser 300.

Another interesting detail of the forthcoming ‘Cruiser 300, is that these technical drawings show both a push-button and traditional ignition barrel starting system, indicating that Toyota will be marketing a Safari specification version of its luxury SUV.

The new Land Cruiser 300 is expected to be revealed by early May 2021. 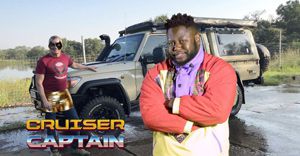