The crown of more than 51,945 people at this past weekend's Match in Africa - which saw Roger Federer take on Rafael Nadal in a charity match in Cape Town - set a new world record for the largest attendance at a tennis match... 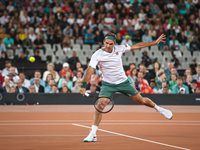 The sixth Match in Africa took place at the Cape Town Stadium on 7 February 2020. The record breaking 51'945 fans witnessed history in action, when Roger Federer and Rafael Nadal went head-to-head raising USD 3.5 million (approximately R54.6 million) for the charitable Roger Federer Foundation. The Match in Africa also showcased a host of local talent in between the matches, including the legendary Ndlovu Youth Choir and the energetic Zip Zap Circus.

#MatchInAfrica: What social media said about the Nadal vs Federer tennis match for charityArticle

Meltwater tracked news and social media mentions on '#MatchInAfrica' since the beginning of the year, and conversations surrounding the riveting rivalry that fans were hoping to see...

SA gears up for a Federer-Nadal showdown at CT StadiumArticle

The sixth Match in Africa - and first to be held in Africa - will take place at the Cape Town Stadium on 7 February 2020. The event - which will see a Roger Federer and Rafael Nadal showdown - is set to be the biggest tennis event South Africa ever has seen...

Shimmy Beach Club will be hosting a live outdoor screening of the Federer vs Nadal match on Friday, 7 February, 7pm...

KG just does it, with NikeArticle

PRP treatments help to put the 'go' back in golfersArticle

One of the potential treatments professional golfers will be considering this holiday season is that of platelet-rich plasma (PRP), according to new research by private healthcare search engine, WhatClinic.com...

Japan's Line messaging app worth $9.8bn ahead of listingArticle

TOKYO, JAPAN: A smartphone messaging app set up in the aftermath of Japan's 2011 quake-tsunami disaster has applied to list on the Tokyo stock exchange, in an offering that could be worth more than $9.8bn.

RTS crowns CNN International as News Channel of the YearArticle

LONDON, UK: Last night at the Royal Television Society (RTS) Awards, CNN International was crowned News Channel of the Year, beating off competition from the BBC and Sky News

Let me start this article by congratulating the Stormers on a fantastic game. They really did well to secure a home semi-final and Stormers supporters can really be proud of the team. When you have had a great season, as have the Stormers, then you create a lot of expectation and that is exactly what I experienced at Newlands on Saturday.