During the annual Clean-Up and Recycle SA Week, South Africans are encouraged to make a difference where they live, work, learn or play by removing plastics and other litter...

Tidying up their act for International Coastal Clean-UpArticle

Fact: there are more than 51 trillion pieces of microplastic in our oceans - that's more than 500 times more than the number of stars in our galaxy... 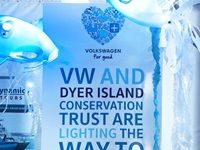 In partnership with Volkswagen, Marine Dynamics, and the Overstrand Municipality, the Dyer Island Conservation Trust commemorated International Coastal Clean-Up Day with a special clean up in the Gansbaai area.

Organisers of this year's International Coastal Clean-Up Day that took place on 18 September, said this year's event was the best since South Africa officially became part of the biggest volunteer effort for ocean health in 1996...

As the local coordinator of the world's biggest volunteer effort for ocean health, Plastics|SA is expecting thousands of South Africans to flock to beaches, dams and water sources around South Africa on Saturday, 19 September to partake in the International Coastal Clean-up Day...

Cleaning up SA for a sustainable futureArticle

From 14-19 September this year, South Africans will once again be encouraged to clean up and recycle in their environment as part of annual National Clean-Up and Recycle Week...

Plastics SA has just released the nation's latest plastic recycling results for the year 2013 - 280,000 tons of plastic (20.0% of all plastics manufactured in South Africa) were diverted from landfill and recycled during 2013.

The 2014 Clean-Up and Recycle Week will be taking place from 15-20 September, culminating in National Recycling Day on Friday, 19 September and the 29th International Coastal Clean-Up Day on Saturday, 20 September.

The eyes of the world will be focused on the health of our oceans when World Oceans Day is celebrated on Friday, 8 June. Since it was first introduced in 1992, nations around the globe participated in the planet's biggest celebration of the ocean on this date as they raise awareness of the important role the sea has to play as a source of food, oxygen, medicine and trade routes.