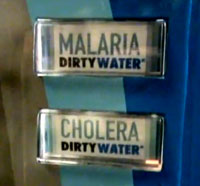 During World Water Week (March 22-29, 2010), visitors in the Union Square Park area were able to sample the taste and benefits of Dirty Water. Available in a wide variety of choices like malaria, cholera or even typhoid, Dirty Water was not a new edgy designer brand but a way of bringing the realities of the world water crisis to every day New Yorkers.

A specially customised vending machine dispensed murky discoloured water in various appealing "flavours", as campaign staff tried to persuade onlookers to part with their cash in return for "contaminated" water.

They didn't drink - but they donated

Unsurprisingly, while the many people chose to pass on the contaminated water, they did choose to donate money to the Tap Project fund, either by putting money directly into the vending machine, or by text donations.

This eye-opening Dirty Water initiative from Casanova Pendrill New York, went beyond the usual collection strategies for Unicef with this unique street activation that shocked the local public who encountered the event.

This effort was part of a much bigger pro-bono Spanish/English campaign that Casanova Pendrill executed within Unicef´s Tapproject.org. This is first time the campaign expanded specifically to a local multicultural audience. The activation secured US$500 000 (about R3.7 million) in donated media including TV spots, radio, OOH, web banners and events.