Demand for smartphones higher than ever before in Europe

15 Feb 2012 | Email | Print |  PDF
NUREMBURG, GERMANY: In 2011, demand for mobile phones once again increased in Europe, largely as a result of the rising popularity of smartphones. According to GfK, 3.2% more mobile phones were sold in 2011, in particular the sales of smartphones increased by 67%.

Last year, 258 million handsets were bought by European consumers, a 3.2% increase on 2010. This positive development was attributable above all to one segment in the mobile phone market: smartphones, sales of which shot up by 67%.

In 2010, smartphones only constituted 22% of the sales market, but in 2011 this figure increased to 36%. In December 2011, the share climbed to 45%. Retailers in all 25 surveyed countries in Europe registered high double-digit sales, ranging between 35% in the United Kingdom and 105% in the Eurasian countries of Kazakhstan, Russia, Turkey and the Ukraine. With a volume share of over 17%, the United Kingdom is the biggest market for smartphones in Europe at present, followed by Germany, Austria and Switzerland with 16% overall. The average price of a mobile phone in Europe increased by 8% between 2010 and 2011, to €200.

GfK retail experts anticipate that the digital devices industry, which includes mobile telephones, LCD televisions, computers, digital cameras, tablet PCs and office devices, will achieve 22% of its global sales this year through smartphone sales alone. This would equate to a growth of 4 percentage points on the 2011 figure. 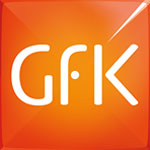 The GfK Association was established in 1934 as a non-profit organization for the promotion of market research. Its membership consists of approximately 600 companies and individuals. The purpose of the Association is to develop innovative research methods in close cooperation with academic institutions, to promote the training and further education of market researchers, to observe the structures and developments in society, the economy and politics that play a key role in private consumption, and to research their effects on consumers. Survey results are made available to the membership. The GfK Association is a shareholder in GfK SE.