20 Mar 2019 | Email | Print |   PDF
Tanmoy Dey, a graduate of Shahjalal University of Science & Technology, Department of Architecture in Bangladesh, along with his team mates Louise Bani Sarcar and Syed Golam Rabbani, were earlier this month announced the winners of the Rise in the City international architecture competition for affordable housing in Maseru, Lesotho. 'Creating Spaces', submitted by Dey and his team, was selected from among 56 entries from 30 countries. 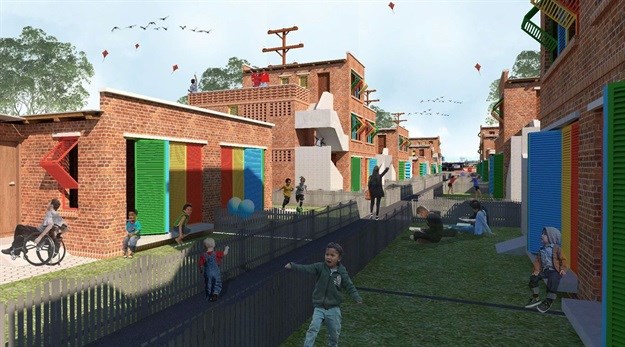 The competition concept split Maseru into 100 virtual blocks assigned to 100 architecture students or recent graduates, each with a mentor architecture firm and a sponsor. Dey’s mentor is Samuel Herpin of Baton Rouge, Louisiana-based RHH Architects (formerly Remson | Haley | Herpin Architects), and his sponsor is Revel Partners.

The competition brief challenged entrants to design a high-quality, sustainable, and energy-efficient home, which is especially important in Lesotho given the country’s very cold winters and hot summers, for less than LSL50,000 ($3,750). The brief also sought designs that would allow the home to be scaled up so that one family could incrementally add extensions, or a home that could be replicated as a larger building or as row housing.

The Rise in the City competition was launched in June 2018 by the non-profit Rise International (Relationships Inspiring Social Enterprise) as an international collaboration to tackle Lesotho’s housing crisis. As outlined in the National Housing Policy: “The cheapest house contractors will build is LSL170,000 ($12,750). Yet 70% of Lesotho’s population can only afford houses of LSL48,000 ($3,600) or less.”

The response to the competition was overwhelming, with more than 150 applications from 39 countries, 100 internationally renowned architectural firms volunteering their time as mentors, and 38 sponsors. By mid-November, the mentors offered feedback to 78 preliminary designs, and by mid-December, 56 entrants submitted their final designs.

The six shortlisted designs were submitted by: Tanmoy Dey (Bangladesh); David KwantwiMensah (Ghana); Tumelo Lerata (Lesotho); Sixin Liang (Italy); Amanda Saputri (Indonesia); and Gogo Zhu (China). With architecture being such a male-dominated field, it was particularly encouraging that three of the six shortlisted designs were by female architects.

Members of the public also had the opportunity to vote for their favourite design. The People’s Choice Award, as well as the local Lesotho winner of the most promising design, went to 'New + Old' by Tumelo Lerata, the only local finalist who recently graduated from Lerotholi Polytechnic in Maseru as an architectural technician. His mentor is Benjamin Porto of New York City-based Snarkitecture, and his sponsor is The Durst Organization. People's Choice Award and Most Promising Design by Tumelo Lerata

Following a community design workshop that will include both Dey and Lerata, along with low-income families and the local construction sector, the winning design will be modified and built by the Lesotho Housing and Land Development Corporation. The prototype will be used to gauge the market response as to whether it is a viable solution to the current shortage of affordable housing in Lesotho.

According to the jurors, “The ingenuity of Tanmoy Dey’s winning scheme is encapsulated in the simplicity of the plan, and the ability of the house to incrementally expand vertically. The building can evolve into a more urban and dense environment with a good public street presence and an interior with enhanced privacy.” Dey was ecstatic to learn that his team had won the competition: “It is a great privilege for us to be awarded first prize among so many talented designers from all over the world. Our concept is to involve the users – the Lesotho people, and to prioritise their necessities and lifestyles to ‘create spaces’ for them rather than ‘design’ a residence. Our prototype can be adjusted to meet various requirements – small to large households, owner or tenant, and even allow for future extensions. Courtyards and green spaces will encourage community activities. Using local materials ensures easy construction within a limited budget. We thank Rise for organising such an innovative, community-oriented design challenge. A special thanks goes to our mentor Samuel Herpin and sponsor Revel Partners for supporting us in this competition.”

Tumelo Lerata was also thrilled with his awards, commenting: “The highlight of the entire competition was working with an internationally renowned architect as my mentor. I have learnt so much from this experience. This has boosted my confidence in the quality of my work.”

The shortlisted designs were exhibited at the Alliance Française in both Maseru, Lesotho, and Cape Town, South Africa, as well as at the recent International Design Indaba Festival.