#StartupStory: Kru & Co on 'going viral', why TikTok is the future of social mediaArticle 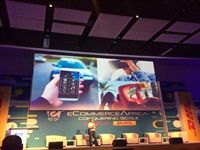 A peek into the fifth annual eCommerce Africa conferenceGallery

The fifth annual eCommerce Africa conference took place at the CTICC from 19-20 March 2019. It got underway with a keynote session by the founder of BrandLove, Chantel Botha. Founder of the Billybo Group, Mike Joubert, delivered a talk titled 'Why your story matters', highlighting the importance of brand storytelling. Below are some images of the event.

#ECO19: Unpack why your brand story matters before you start telling itArticle

In a talk titled 'Why your story matters', in the 'driving demand' track of the fifth eCommerce Africa conference, attendees heard from Mike Joubert, founder of the Billybo Group. Dubbed a godfather in SA brands and marketing, he walked us through the virtue of storytelling and why it matters, while shedding light through examples from some of the greatest commercial stories ever told...

#CEMAfrica2018: Learn from these examples of storytelling to create emotional relevance!Article

Mike Joubert, founder of the Billybo group - not to be confused with Australian surf apparel brand Billabong - spoke on the first day of CEM Africa about the link between the core emotional connection created by great storytelling, which in turn builds relevance and authenticity to the emotional drivers in the customer journey...

#CEMAfrica2018: Why we need to talk about emotion in the boardroomArticle

In the first keynote session of the Customer Experience Management (CEM) Africa Summit 2018, Diane Magers of the CXPA explained how to build and execute a CX strategy in an ROI-driven world. Here's what you missed...

CEM Africa kicks off this week!Article

A smart move: taking a B2B publication online and flourishingArticle

When it comes to print publications, many have to fight off the unfortunate view that 'free' often means inferior quality. Mike Joubert, Editor and founding member of TechSmart tells us how he did so, and why TechSmart is now focused online...

More than 50 speakers and panellists confirmed for Music ExchangeArticle

Music Exchange, the independent music conference, will take place on 21 and 22 March, with an additional day confirmed for the 23 March 2013 for workshops - and more than 50 speakers and panellists have confirmed, including some of the most influential names in the music industry.

Over 50 speakers and panellists confirmed for the 2013 Music ConferenceArticle

The most influential names in the music industry have signed up to impart and share their knowledge and expertise at this year's Music Exchange Conference, set to take place from 21-22 March, with an additional day confirmed for 23 March for workshops.

[Thought Leadership Digibate] 08: Choosing the right agency for your brandArticle

The eighth Thought Leadership Digibate, recently hosted by Aegis Media in conjunction with Bizcommunity.com in Johannesburg, focused on choosing the right agency for your brand. If you missed the Digibate, download or listen to the podcast which is now available.

Unparalleled line-up of speakers at the IMC Conference in JHBArticle

With an impressive guest speaker line-up that includes some of the most prestigious names in the business, the 4th IMC Conference in Sandton, Johannesburg, is set to alter the landscape of all aspects of marketing from print media to direct marketing, all the way to the digital and social revolutions.

Aegis Media, in conjunction with Bizcommunity.com, will be hosting the eighth Thought Leadership Digibate that will focus on choosing the right agency for your brand. The event will be held on Friday, 24 August 2012, in Johannesburg and will stream live on www.bizradio.co.za from 9.30am to 11am.

TechSmart is upgrading its magazine look with better paper and cover, launching an SME annual guide and reducing its copy wastage with streamlined distribution.

Companies are using their financial muscle to bring about change.

Quickly... think of a brand... any brand... the make of your shoe, your car, the watch on your wrist or your favourite fastfood. Why did you think of this specific brand?

A new campaign to stop the spread of HIV has the likes of Godessa, Malaika, Louise Carver, Fokofpolisiekar, Karen Zoid, Springbok Nude Girls, kobus!, Loyiso, MXO and 340ml appearing in shop windows in 14 shopping centres around the country.

Levi Strauss South Africa and Sony BMG Music Entertainment have brought together 14 SA top music artists to produce a unique CD in an initiative to raise awareness and funds for HIV/AIDS - an extension of their 'Red for Life' campaign in partnership with the TAC.

Brand damage can be a slow process, a chipping away at your most valuable asset. Or it can be a catastrophe that shatters your brand in a flash. Are you geared for damage control? South African executives seem to lag behind their international counterparts when it comes to brand and media savvy and are complacent in their expectations that a brand-damaging situation will simply go away.

After a year of constant communication and conversations with teens, Seventeen magazine has decided to take action against the apparent teen drug problem in South Africa by embarking on a pro bono advertising campaign called "Know More" that aims to inform teens of the potentially devastating effects of drug abuse and addiction.