Strauss & Co's upcoming auction of contemporary art, which will be up for sale on 13 April 2021, includes original works by Banksy and Mr Brainwash as well as an early assemblage work by Simphiwe Ndzube.

Cape Town-based artist Danielle Clough's vibrant and unique embroidery creations have seen her gain significant attention both locally and internationally. She's worked with major brands such as Gucci and Nike and shown her work across the globe.

Apple Music today launches Africa to the World, a definitive collection of original and exclusive content from some of Africa's biggest music superstars...

Six top creatives from South Africa will serve on the jury for the historic ADC 100th Annual Awards, a global competition celebrating excellence in craft and innovation in all forms of design and advertising...

2021 International Public Art Fest to focus on being 100% sustainableArticle

Baz-Art will host the fifth International Public Art Festival (IPAF) in Salt River, Cape Town from 10-14 February 2021. The theme, '100% sustainable', will focus on art as a mechanism for inclusion and activism...

#Loeries2020: "The future of advertising is Black, female and healthy"Article

The 23rd Annual BASA Awards, partnered by Hollard, are once again shining a spotlight on indelible business and arts partnerships in seven categories...

The International Public Art Festival (IPAF) is calling for proposals for its next edition, which Baz-Art will present in the streets of Salt River, Cape Town from 6 to 14 February 2021...

Between 10and5 Artist Auction partnered by BASAArticle

In honour of Africa Month, Between 10and5 is curating and hosting an Instagram auction. Reminiscent of Between 10and5's auction that kicked off its Creative Women Week in 2019, the auction is a charity initiative and 100% of proceeds will go towards the next round of BASA's Artists Relief campaign...

Issued by Business and Arts South Africa 14 May 2020

The One Club for Creativity has announced the finalists for the global ADC 99th Annual Awards...

Over 20 artists to showcase at International Public Art FestArticle

Baz-Art has unveiled the lineup local and international artists who will showcase the 2020 International Public Art Festival (IPAF) - which will take place in Salt River, Cape Town from 12 to 16 February...

5 things every South African should experience on Reunion IslandArticle

Ryan Enslin, from My Lime Boots, gives his top five activities to not miss when visiting Reunion Island...

Attendance at the event forms part of South African Tourism's global strategy to double international tourist arrivals to the country to 21 million by 2030...

The International Public Art Festival 2020 has extended an open call to artists based in South Africa and the rest of the continent...

Explore the undiscovered local gems that SA has to offerArticle

Here are a few of SA's major cities which are guaranteed to have you feeling like you're on an exotic holiday, without breaking the budget...

Day 3's finalists have been announced for Loeries 2019...

Day 2's finalists have been announced for Loeries 2019... 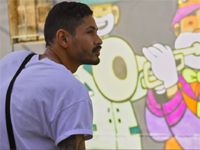 The hiss of a spray can adds to the sound of Woodstock’s bustle. Street artist Chad Hanning is painting an animated visual on a once-bland wall. The cartoon figures he creates depict a multitude of feelings and offer commentary on South African politics. Hanning’s creative pursuit is a brave one. In 2010, the City of Cape Town passed a bylaw declaring the presence of graffiti anywhere within its formal jurisdiction a public nuisance. All signs of this expressive act were painted over. But Hanning believes these uniform surroundings don’t represent our vivid rainbow nation. Creating under the name Bushywopp, he’s determined to solidify the importance of street art. Read Chad Hanning's full story here.

African vision of the future of digital creativityArticle

Good Trouble, currently up for three 2019 Teen Choice Awards, is now streaming first and only on Showmax in Africa...

Luxury fashion brands are making a splash in the art worldArticle

Louis Vuitton reopened its refurbished flagship store in Florence in March 2019 to great fanfare from the fashion industry. The brand made great play of the fact that the store is replete with artworks...

Plans to build a luxury eight-storey apartment block in Woodstock have been put on hold by Heritage Western Cape which has instructed the developers to review the impact on social heritage...

Converse brings the female narrative to the foreArticle

In 2018, Converse in partnership with brand and communication agency, Joe Public, launched their 'All The Stories Are True' campaign...

Why photography is an important skill for designersArticle

The creative industry is a competitive one, and designers are increasingly asked to go above and beyond to fulfil their clients' needs. One of the most crucial weapons in their arsenal? Photography...

Kirsti Buick, Issued by Academy of Digital Arts 22 May 2019

The giant mural, which was unveiled by the South African Minister of Tourism, Derek Hanekom, was created by four artists and represents Durban as well as broader South African society.

Indaba 2019 teams up with local street artists in DurbanArticle

South African Tourism has partnered with three acclaimed Durban artists to paint a 22-metre wall mural inside the Inkosi Albert Luthuli International Convention Centre that will be unveiled during Africa's Travel Indaba taking place from 2-4 May 2019...

Non-profit organisation Baz-Art has announced the lineup for the 2019 International Public Art Festival (IPAF), which will be held in Salt River, Cape Town from 9-17 February 2019...

Mike Schalit, co-founder of Net#work BBDO, has introduced a new 'Wear it Forward' range of t-shirts and caps with Marlboro Originals through the agency's non-profit Mal Foundation...

Nadia Agherdine and Anthea Brock, local street art guides, are taking their tours to the next level with the introduction of voice mapping to ensure accessibility for more locals...

Halls took to the streets of Johannesburg to drive awareness of its "Own the Moment" campaign, promoting the online competition and social engagement, and encouraging Google search...

Can Luke Dale-Roberts slow down already?! Not only content with establishing and being involved with the wildly successful Test Kitchen, Pot Luck Club, and Shortmarket Club, his most recent venture Salsify is yet another finger in the Cape Town culinary scene pie...

Giant Films in collaboration with an international team of creatives recently completed an anti-poaching, 90-second film for Over and Above Africa...

To celebrate local talent and creativity, Woolworths will once again collaborate with the frontrunners of local fashion as they present their latest Style by SA range...

This week, we got behind the selfie with Arthur Goldstuck. He is MD of World Wide Worx, editor-in-chief of Gadget, and is sharing his annual research announcements at last week's Social Media Landscape Briefings 2019 in Sandton and Cape Town...

Where does graffiti stand when it comes to copyright?Article

Once considered vandalism and destruction of public property, graffiti has been embraced by fashion houses and major corporations in their advertising campaigns...

Seedbeds of Transformation: The Role of Science with Society and the Sustainable Development Goals (SDGs) in Africa...

The recently opened Norval Foundation in the Cape Town suburb of Steenberg offers a proud, new public resource and new levels of excellence in the curation and display of South African and African visual art.

Coca-Cola Beverages Africa has announced the opening of its new head office in Port Elizabeth. The building will house the largest Coca-Cola bottler on the African continent...

Big brands ripping off street art is not cool: why illegal graffiti should be protected by copyrightArticle

When street artist Jason "Revok" Williams sprayed his trademark chevrons on a handball court in Brooklyn, he probably didn't imagine he would end up in a legal fight with a high-street fashion giant for breach of copyright...

Dubbed "We need nature", this year's IPAF focused on creating awareness around climate change, which affects everyone in the world. Through this message, IPAF hopes to alter behaviours toward nature... 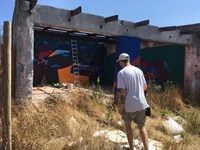 Volkswagen will hold the #VIVOnation Festival in celebration of the launch of the new Polo Vivo.