17 Jun 2022 | Email | Print |  PDF
Issued by: Afrika Tikkun
Afrika Tikkun in partnership with 1on1 Math Khan Academy hosted brilliant young minds at our annual Math Olympiad Competition, on 5 June 2022 at the Houghton Hotel, in Johannesburg. The competition saw 60 of Afrika Tikkun's young boys and girls, from our five Centres of Excellence in Alexandra, Braamfontein, Diepsloot, Mfuleni, and Orange Farm, competing in this year's final. The final competition was a culmination of top performers from Grade 1 to Grade 12, beneficiaries of our Child and Youth Development (CYD) Programme at the Centres. The focus for this year’s competition was based on content prescribed by the Department of Basic Education, used by the participants in both the semi-final and the final.

This year's competition focused on each grade and not per phase like last year. The top performers for each grade represented their centre at the final competition. Additional practice material was provided to all grades through classrooms created by 1on1 Math at Khan Academy, they were available both in-person and online.

The collaborative initiative was designed with the purpose of:

Although the government has spent more than the global average on education, schools remain under-resourced and teachers, persistently absent. According to a 2015 report, by Nic Spaull gauging child schooling, 68% of schools nationally, have no computer labs and 77% of public schools nationally, have no libraries. With the myriad challenges that are associated with poor school outcomes, such as a high rate of school dropout and grade repetition, there is an urgent need for targeted initiatives. One such initiative is Afrika Tikkun’s CYD After School Programmes (ASPs), which serve to curtail the limitations of poor school outcomes. 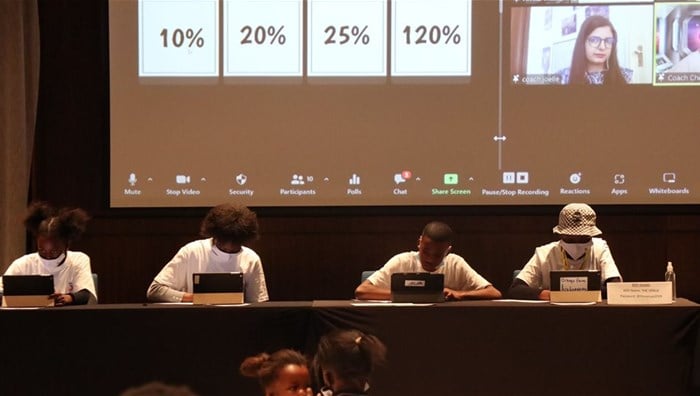 The final interactive competition was one of the multiple initiatives designed to promote a platform that encourages knowledge generation and acquisition among young people. It presented a gamified approach where Mortal Kombat meets Mathematic problem-solving.

The winners from each Grade representing our different Centres won:

For more on future events and information on our programmes go to Afrika Tikkun.

Afrika Tikkun is your partner in transformative development. We grow, nurture and establish young lives from cradle to career with sustainable opportunities that really do matter. Our focus is to empower young people through trusted partner contributions - and our promise is to nourish our partnerships for the greater well-being of our young people. We believe in kindness. We believe in impact. We believe in true empowerment.
About Us | News | Contact