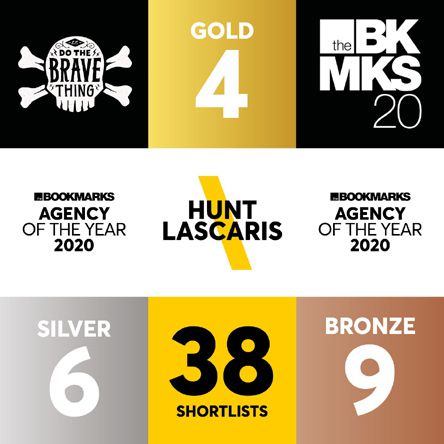 These accolades extend a strong run of wins and finalist nominations stretching back to 2018. This additional recognition also comes hot off the agency’s recent Creative Circle 2019 Annual Awards and 2019 Agency of the Year Wins.

TBWA\Hunt Lascaris’ big winners of the night were Joburg Ballet for The Unbound Production and The Blame no More campaign for Hype Magazine. Joburg Ballet also picked up gold in the Digital Strategy Campaign, silver in the Digital Integrated Campaign and Innovative use of media, and a bronze in the Online Video Series and Excellence in Craft Video Production Categories. The #BlameNoMore campaign highlights the moral and logical absurdity of accusing someone of their own rape. The campaign which is a powerful call for change aimed at every South African, took silver in the Digital Strategy Campaign, Digital Integrated Campaign and Branded Content categories.

Botswana’s Okavango Diamond Company collected a silver for Excellence in Marketing Copywriting and a bronze award in the Online Video Category for ‘The Light at the Start of Everything', a visual poem written by Iain Thomas for the remarkably rare Okavango Blue diamond. The Okavango Blue is the largest blue diamond that has ever gone to market.

“First off I want to give a massive shout-out to the Bookmarks for taking the step of not only hosting the awards online but doing so in such a great way. TBWA\Hunt Lascaris values and appreciates the recognition that the Bookmark Awards achieve for the creative work that we do. These important awards take the time to spotlight critical work that reflects the integration of digital and storytelling as well as the innovative ways brands are exploring their roles in this new age,” said Karabo Denalane, CEO, TBWA\Hunt Lascaris.

TBWA\Hunt Lascaris strives to be the cultural engine for 21st century businesses. The agency’s biggest challenge is the balance between the-now-and-the-next.

“You’ve got to be focusing on the now; that’s where your bread and butter is. It’s not either/or. The now is the stuff you need to do today; the stuff your clients pay you for. But if you don’t focus on the next you won’t be relevant in future. When you live in the-now-and-the-next in a marketplace that’s changing at warp speed, you have to face the now minute-to-minute, while the next is materialising simultaneously. It really is about the-now-and-the-next,” said Peter Khoury, CCO, TBWA\Hunt Lascaris.

Creativity is one of the key enablers of personal and business success in the Fourth Industrial Revolution. It is also something South Africans have in spades.

Fast Company also recently named TBWA\Worldwide as one of the planet’s most innovative advertising collectives. Since this is the second year in a row that TBWA\Worldwide has received this accolade, “this is evidence of how we place innovation at the core of our business and we will continue to do so,” said Luca Gallarelli Group CEO of TBWA\South Africa.

“Awards like this serve to develop and strengthen South Africa’s critically important creative industry as we strive to broaden inclusion and position the sector for growth and job creation,” concluded Gallarelli.
Like Save Email Print PDF

Comment
Comment guidelines and disclaimer
LEGAL DISCLAIMER: This Message Board accepts no liability of legal consequences that arise from the Message Boards (e.g. defamation, slander, or other such crimes). All posted messages are the sole property of their respective authors. The maintainer does retain the right to remove any message posts for whatever reasons. People that post messages to this forum are not to libel/slander nor in any other way depict a company, entity, individual(s), or service in a false light; should they do so, the legal consequences are theirs alone. Bizcommunity.com will disclose authors' IP addresses to authorities if compelled to do so by a court of law.
Read more: TBWA\Hunt\Lascaris, Bookmarks

Show more
Republication of selected Bizcommunity content for non-commercial purposes is allowed if the original article is linked to with "Source: www.bizcommunity.com". Please click here for more information and to request permission.