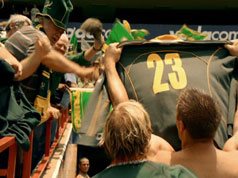 Intended to create a lasting emotional bond with the country's rugby fan, the campaign has been developed by traditional full-service agency and Vodacom's marketing communication partner for over 15 years, Draftfcb Johannesburg, and was shot by boutique commercials production company, Picture Tree, with director Alan Irvin.

The ‘big idea' at the centre of every piece of communication making up this bold and innovative marketing attack by Vodacom on the highly-competitive cellular services market is the man wearing the number 23 on his back. He's an integral part of the team, knows all its players and their strengths and weaknesses intimately but, he's not the coach or the manager or even a player, he's a fan, the fan Vodacom wants to embrace and influence at as many touch points as possible.

A critical driver of the interactive element of the campaign is the website, www.player23.co.za. This content-rich environment includes details on every team and every player in all the rugby properties Vodacom sponsors from the Vodacom Super 14, the Vodacom Cup and the Vodacom Tri Nations. Depending on the fan's particular affiliation or preferences, the site will intuitively customise its appearance whenever that fan logs in.

A pared down but just as exciting version of the website - a mobi site - has been developed. Both will make photographs taken of fans enjoying matches around the country available for download, emailing or MMS.

Above-the-line elements launching this during the next few weeks to support the Player 23 digital drive include print, radio, stings and squeeze backs, and a 60 second television commercial featuring the Afrikaans singing sensation, Robbie Wessels, and several dynamite lookers dancing to a jingle the agency reckons will go platinum once released by Wessels.

Like the controversial ‘Leeuloop' execution which drew criticism from some quarters in 2006 but landed up being named as the country's most liked ad by the developed market in Millward Brown Impact's Liking and Noting Tables for that year, this ad is certain to grab the fans' attention and - the agency hopes - will knock the Mexican Wave into the middle of next year as they imitate Wessels and his entourage at every game they go to watch.

Given Draftfcb's success rate at ensuring its clients' brands and their personalities become part of South Africa's popular culture - think ‘Yebo Gogo', ‘Eish', ‘Sirriusly' and ‘Yo Yo Yo', for example - this optimism is well placed.

Vodacom's Managing Executive: Marketing, Enzo Scarcella, said that the challenge put to the Draftfcb team was to maintain the breadth of Vodacom's exposure through its extensive rugby sponsorship investments but to deepen the experience and tangible value proposition for the rugby supporter and greater audience.

“We wanted a campaign that would allow us to own the emotional connection that South African rugby supporters have with the game,” he said. “We wanted them to know that Vodacom is core to the experience of the game, that it not only connects people with people, but connects people to rugby.”

Draftfcb Johannesburg Executive Creative Director, Grant Jacobsen, explained how this was achieved. “There are always 22 players on a rugby team - typically eight forwards, seven backs and seven impact, or bench, players. Together, they form the Match 22. With this campaign, Vodacom introduces a new position to South African rugby teams. From now on, there will be a 23rd player on each team: Jan, Player 23.

“Jan is the ultimate Player 23. He is the guy who lives for the game, who eats sleeps and dreams the game, the supporter who has worked hard and who has earned the number 23 on his back. Whether we like to admit it or not, there is a bit of Jan in everyone who truly loves the game. Jan symbolises that part of us, the part which is not ashamed to shout at the top of our lungs: ‘Prooooovince' or ‘Nou die Blou' or ‘Bokke'. ‘Jan' is that part of us that totally loses its cool when Habana crosses the tryline, or when Schalkie flattens McCaw. Jan is the spirit of the truly dedicated South African rugby supporters.

“Because of Jan's importance to the game, our local rugby stars revere him. After all, without Jan, there would be no game. So, Draftfcb has captured a few of Jan's celebrity moments and shows Jan being admired by players like Schalk Burger, Jongi Nokwe, Beast Mtawarira, Bakkies Botha and more. It would be safe to say that these guys idolize Jan because he is the supporter who gives it all for the team he or she loves.

“It is the ultimate honour, to finally be included as a true member of the team, an essential player without which the team simply could not function. And the ultimate believer in Jan is Vodacom, the greatest supporter of Player 23.”

Scarcella concluded: “I know that Player 23 is a great campaign, and goes to the very heart of our marketing requirement for rugby. I'm certain that consumer take up will be impressive and that we all soon acknowledge Jan as our hero too.”

Player 23 went live on Friday February 13, and will be dominating all major media channels for the upcoming season.

Nahana Communications Group is a collective of leading specialist agencies that provide solutions across the marketing ecosystem, engaging with clients early, intelligently and collaboratively, to tackle the business problem, not just the creative task.